It was Hot Magazine's 7th birthday bash, held at Zouk KL with party goers and friends. Saint and Sinners Party, aptly named as the crowd thronged in dressed in Halloween outfits to portray either saints or sinners. Thanks to Benjamin's invite, I had the chance to catch this really happening event.
A short introduction on what Hot Magazine is all about, quoted from their Facebook page. 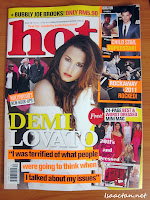 "Hot Magazine is this fortnightly celebrity entertainment magazine which highlights the latest and hottest happenings in the world of celebrity, movie, music, TV, style and sports in the most creative way possible"


So there I was early in the night at Zouk KL, all ready for the Halloween themed party. Even from outside the venue, we could already spot all the fancy dressed party goers, decked in Halloween outfits. Some were truly scary, while other looked hot.
Saints & Sinners, Hot Magazine's 7th Anniversary Party kicked off at about half past 8, where we were greeted by the very hot and handsome Linora and Jeremy from Red FM. Throughout the night, we were entertained with good music, performances, as well as some really good showmanship from the Halloween dressed folks. Not forgetting the free flow of alcoholic drinks, and some finger food which warmed all of us up for a night of partying.
There were some really cool outfits that I managed to capture throughout the event. These awesome folks really took the Halloween theme seriously, and brought shame to guys like me who did not come in proper Halloween attire. Do check out below on some photos I took that night.
Overall, it was an awesome night, one which I enjoyed, especially when I see all my friends having fun with the drinks and cameras. We were a bunch of fun loving bloggers, and I dare say each one of us do know how to let our hair down and party when the right time comes around.
Congratulations to Hot Magazine for reaching their 7th year of churning out great entertainment news for the readers, and thanks for organizing this awesome birthday bash. May there be many more great years of "Celebrity Entertainment" to come!
My dear blogger friend Glow's Halloween Video