40 Drunkards In A Room

What do you get when you stuff 40 dudes (plus a few dudets) into a room and give them lots of alcohol on the pretense of having a Chinese new year gathering plus farewell party plus birthday celebration? Well, you get a lot of red faces plus a hell of a noisy room!
Well, there we were at Six Happiness Restaurant near Ampang Waterfront from 8.30pm until 11pm having fun, singing away. I think it was fun as it gave the chance for everybody to release the tension from work and just let go. Oh, I forgot to mention, this was a Chinese New Year yearly gathering with colleagues, except this year there was a farewell included for one of the bosses, plus 2 birthday boys.
I wanted to take a picture of the dishes, but due to the number of guys at each table, the moment the food was served, it was snapped up before you could say "Kampai!"  I did manage to snap one picture of the birthday cake. 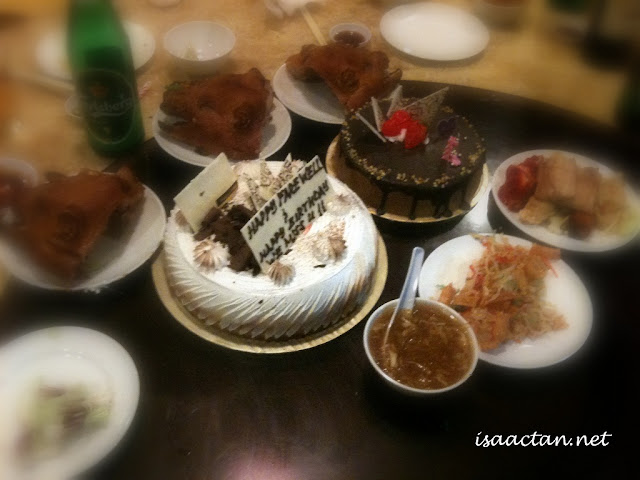 What can I say, I love my colleagues, especially when they're drunk! Gong Xi Fa Cai guys! We did take a group picture, but it was taken using another colleague's DSLR. Maybe I'll update this post with the picture once I sober up a bit.
Cake Celebration Chinese New Year Drunk Friends