The Carlsberg Friendtastic Machine - A Vending Machine That Celebrates Friendship

An interesting update to share, one which has just been announced recently. There’s a new vending machine in town that is nothing like any other around. The Carlsberg Friendtastic Machine is putting the ‘closeness’ of friendship to the test and rewarding true friends with ice cold Carlsberg.

The one-of-a-kind vending machine is the latest innovation from Carlsberg and an extension of the brewer’s Friendtastic Campaign launched earlier this year, which gave groups of friends the chance to enjoy a thrilling helicopter ride to one of the country’s most popular tourist spots for an exclusive two-day/one-night stay at the Genting Grand Hotel Suite in VIP style.

The Carlsberg Friendtastic Machine on the other hand, gives friends another chance to strengthen their ties and camaraderie in a fun way, and be rewarded with ice cold Carlsberg beers.

The machine, which scales up its difficulty setting to match the number of people playing, is an epic version of touch screen arcade games but with a uniquely Carlsberg twist. With a minimum of 2 and supporting up to 5 players, this is an ultimate dexterity arcade game which requires players to coordinate closely to accomplish all 3 challenging but fun stages in order to win. With friends spilling over each other, it’s a tangle of arms and legs till they succeed.

A can of ice cold Carlsberg will be dispensed to each player as soon as the group completes the game successfully. What’s more, lucky friends may even win themselves surprise gifts in addition to beer. 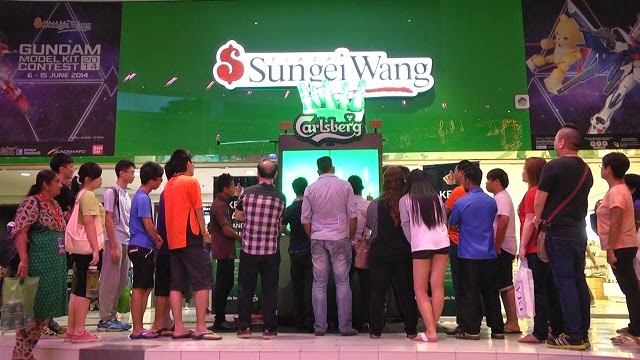 Do check out Carlsberg's Facebook page at www.facebook.com/CarlsbergMY for upcoming venues.