If you haven't checked out my pre-event writeup previously for this year's Heineken Thirst 2012, check it out here! (Heineken Thirst 2012 Coming This December) This post would be a more detailed writeup with the artistes line-up and also to serve as a free tickets giveaway post. I only have limited tickets to giveaway courtesy of Heineken, so be sure to read until the end to find out how! 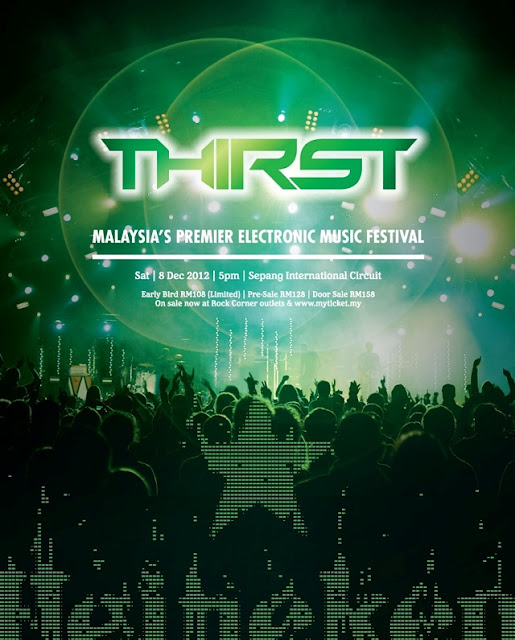 Ticket Prices
Early Bird: RM108 *sold out
Available only at Rock Corner, The Curve from 31 October – 4 November at limited numbers

At the Door: RM158
Available at venue from 3PM on event day

Expanding into new dimensions of music and creativity with a series of exclusives, this year Heineken Thirst brings to us two stages of passion and excitement against a backdrop of towering light sculptures. This year's star line-up is pretty cool too, with twin headliners in the shape of Swedish house supremo Avicii and French electronica pioneers Justice across two arenas, both playing their debut Malaysian sets.


Alongside these international icons, a line up of top-flight international and local artists will be bringing Heineken Thirst to its pulsating climax. Progressive electro experts Above & Beyond need little introduction to Malaysia’s Electronic Dance Music fans. This globe-spanning UK-based trio ranks Malaysia as one of its favourite destinations, ripping the roof off whenever they appear.

Joining the stellar line up of artistes to perform at Heineken Thirst 2012 is underground favourite Brodinski whose mix of dirty house and electro and unceasing work ethic have made him a firm favourite on indoor and outdoor stages worldwide. Not forgetting Gesaffelstein whose cosmic electro nods to the 1980s darkwave synth movement.

Not forgetting our local talented artistes, with a reputation for nurturing talent and connecting it to the leading edge of international music trends, the local talent reads like a who’s who of Heineken’s talent development achievements of the last decade. Goldfish & Blink, Malaysia’s first EDM superstars will be drawing a capacity crowd at the main arena, while Thirst winner DJ Blink’s underground electronic project LapSap, along with DJ XU, will be rocking the second stage.

Then there’s Mr Nasty & GuruGuru, featuring another Thirst winner, Hoong (part of Altered Image), and Found @ Thirst alumni Phil K Lee (Champion, 2010), Tommy Cham (Champion, 2011) and Nick Haydez (Finalist, 2011), which all adds up into a line up of incredible Heineken discoveries. Not to mention Jee Hoe and Hypeembeats whose fresh-faced indie, pumping electro and techno have rocked everything from dark room club nights to events like Heineken Green Room and outdoor shows.

In another Heineken Thirst exclusive, the festival will feature a huge sculptural centrepiece in the form of Robert James Buchholz’s Wish, fresh from its appearance at this year’s Electric Daisy Carnival in Las Vegas, a 17 metre high installation consisting of three LED lit flowers that pulse in time to the music. Add to that the presence of the world’s leading DJ celebrity snapper Rukes, the self-taught LA based photographer who tours the EDM festivals of the world with his lens and you have the recipe for a night of supercharged thrill-seeking and discovery on December 8 at Heineken Thirst, Malaysia’s leading electronic music festival.

Now comes the part where I will be doing the ticket giveaway on my blog. I have 4 X Heineken Thirst passes worth RM158 each, which I will be giving out a pair each to two winners. It will be a really simple one, one which only requires you to like my Facebook page (http://www.facebook.com/isactanjs), oh and do post in the comments below after you have done it with the reason why you would like to attend this year's Thirst 2012. The winner would be chosen by the organizers. May the best comment win! Hope to see you there at Thirst 2012!

PS: The results are out, two winners were chosen, each winning 1 pair of passes to Heineken Thirst 2012 at Sepang! Congratulations to Jessy Long, and Allisya Erliza!

Jessy Long:
Me wanna go for Heineken Thirst 2012 because the BF and I have not been to a Rave Party before. We would like to experience the madness of a RAVE party, enjoy bottles of cold Heineken beer, and dance together with the music the entire night before the end of the world. muahahahhahaha! Party goers rocks!

Allisya Erliza:
Reasons why I want to attend this year's Thirst? Thirst is one of the event I wouldnt ever miss for the world! I deserve to win, not to say deserve but yeah most likely FUCKIN' NEED in the most desperate way possible for this passes because currently Im struggling for my finals year in diploma this week, suddenly I saw your blog, & it hit me... its like sweedish house mafia singing 'Dont you worry, dont you worry child, see heaven's got a plan for youuuuu' Plus, it will be a great way to end my 2012, no shit!