Testosterone filled shooting action with a star studded cast, that pretty much sums up The Expendables 2 screening which I had the opportunity to catch last night over at GSC Midvalley courtesy of Chilla Cup. If you have caught the first installment back in 2010, this one is more or less the same.
﻿
﻿
"Directed by Simon West and written by Richard Wenk and Sylvester Stallone. The Expendables 2 is a sequel to the 2010 action film The Expendables, and stars Sylvester Stallone, Jason Statham, Jet Li, Dolph Lundgren, Chuck Norris, Randy Couture, Terry Crews, Liam Hemsworth, Jean-Claude Van Damme, Bruce Willis, and Arnold Schwarzenegger."

﻿
﻿
﻿
﻿
The film itself kicked off directly into an intense action scene with the group The Expendables blowing everything up, with huge guns and all. Here we see each of the stars get some screen time in showing off their machoness even though it can be seen that our heroes were no longer really in their prime any more. I mean, these are all my idols, John Statham, Arnold, Chuck Norrise, and Bruce Willis being some of them, but there is no more recent young action heroes?

﻿
﻿
﻿
﻿
The plot goes along the lines of Stallone taking up another seemingly easy mission from Mr Church (Bruce Willis), which got one of their new members Billy (Liam Hemsworth) killed. All hell breaks loose then as The Expendables goes on a revenge mission to track down the villain, Jean Vilain (Van Damme) who does a great job being this overly evil muscle packed mercenary.

﻿﻿
﻿
﻿
﻿﻿
Through the movie, we do see some short action bits from the other stars, namely Arnold, Chuck Norris and a others which complemented to the storyline a bit. The plot however was as simple as it gets, as this movie was more focused on playing out the puns, and muscles with shooting action. We had these bunch of stars just having a good time poking fun at each other while blasting everything else into oblivion with their huge guns.

Do check this movie out, if only to catch your favourite action hero. Don't go in expecting a superb action movie, as other than the shooting and wise cracking jokes, there were virtually nothing else of substance. I went in with a low expectation, and it turned out exactly like the first installment of The Expendables, no regrets though, probably I'll rate this a 6/10 just for the stars in The Expendables 2.

A short advert sharing, to get yourself a free cup of Americano Coffee from Chilla Cup when you catch Expendables 2 at the cinemas. 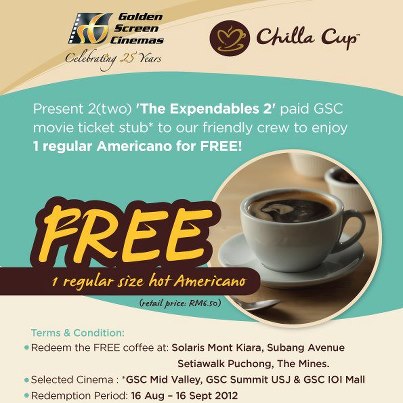