Charlie Brown Cafe, I've heard of this place before where Charlie Brown is the main theme of the restaurant. It was not until a couple of months back when I had the chance to check out the place in Penang Straits Quay Mall. Unfortunately due to the lack of time, I did not have the chance to dine in, hence a few photos of the cafe's brightly coloured cartoon characters should suffice for now until I have the time to have a meal again at this rather cool restaurant. 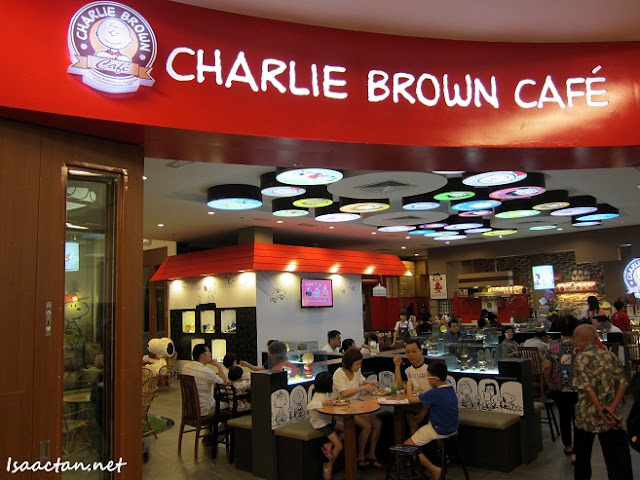 Tel: 04-899 8602 ‎
Website: http://www.charliebrowncafe.com.my
What took me as being really interesting was the colorful cartoon characters drawings on the walls of the cafe. I've been told the food is good too. Anyway check out some of the photos I managed to snap while passing by Charlie Brown Cafe.

[Sponsored Ads] Our trench coat and thomas sabo bracelets provide a real star look to mens leather jackets. Beside this we carry a wide variety of ladies blazers and windbreaker.
For those in the dark over who's Snoopy or Charlie Brown (I suspect the majority of you guys would have seen them at one time or the other), here's a short summary on this really famous comic character.
Charlie Brown is an example of "the great American un-success story" in that he fails in almost everything he does, a total contrast with M. Schulz's work which is referred as "the great American success story". He is meek, nervous and lacks self-confidence, being unable to fly a kite, win a baseball game or kick a football. He is almost bald, with barely a little hair in front. He is Snoopy's owner but apparently Snoopy's intelligence is way much higher than him...
Snoopy, on the other hand, is known as "the world's most famous beagle". He does not look very much like a beagle, because beagle normally has tricolor (tan, black and white) but Snoopy has only black and white fur. Snoopy slept on top of his doghouse (doghouse in the below picture), rather than inside it. He seldom seen to venture inside his doghouse, except to retrieve something, or retrieve his recorder to play the national anthem of America every night before he goes to sleep (memories as recalled from the cartoon).
Source: My Friend, Jia Ween's Blog (http://princesscheryljw.blogspot.com)
So have you tried this Charlie Brown Cafe in Straits Quay yet? I for one can't wait to get the chance to drop by again to sample the food there soon.

i've saw some bloggers writing about this place too, but heard that things are expensive and just so-so.. maybe only attraction is snoopy and charlie brown~~ :p

SK,
yay! thanks for dropping by bro. I haven't tried it yet >< maybe after try will post a review on the food XD

I know a friend who would really love to come here... A snoopy fan! hahaha..

If what [SK] said is true... then maybe just go there to drink and takes pictures everywhere then go XD

Aww...the perfect place for fans to hang out. :D

I am sure children will love t dine at such lively place. :)

Wah.. the character of Snoopy!! Nice wo... First time ever see this shop!! Interesting =D

hope you get to dine in there soon and snap pic of the food there. am wondering what good food they have over there

That's a really cute cafe! :D Wish they had one here in KL too, it would be cool to hang out with friends.

Aiyor...more for little kids, I would think?

I hvn't been there yet.

haha.. henry is cute on the last pic :P

Always pass by to take pictures only.. never went in before.. :)

OMG, love the shots! We used to have one in S'pore too but not sure if it's still around. Lol! Should try the food when u get the chance next time :)

Never been to this place before though heard about it from numerous blogs : )

I like restaurants with themes! Ma sis gonna crazy if she knows about this place. A typical Snoopy fan.

Saw Ho Jiak got publish this place, quite a nice place to bring family for dining experience!

My best memory of Charlie Brown is the comic strip where Snoopy would be sleeping on his red house.