Thanks to ChurpChurp, I got a chance to catch the movie Final Destination 5 over in TGV KLCC tonight. Being a fan of the Final Destination franchise, I did not miss out the chance to catch this special screening. My expectations weren't very high to begin with because we all know Final Destination movies recycle the same plot to death (pun intended) It's how they play out the death scenes that I'm interested in.
The screening for Final Destination 5 this time around was held in TGV KLCC, the close proximity to my home allowed me to reach early to collect the tickets and then catch up with a couple of bloggers over some nice dinner.
Coming back to the movie, Final Destination played out exactly as what I've expected it to do, with the same sick and twisted storyline albeit this time around there was a slight twist in the end. This time, we have a group of 8 employees of a paper making plant on a business retreat who were saved from this really devastating bridge collapse. Believe me when I say it was devastating, the giant bridge collapsed bringing down cement, concrete, mortar, cars and buses down to their deaths in the seas below.
Just for the record, not that it really mattered because we all know they die eventually, we have the cast as follows. They even have one character with the same name as myself.
Nicholas D'Agosto - Sam Lawton (the hero of the movie, the one having the initial premonition)
Emma Bell - Molly Harper (the hero's love interest)
Miles Fisher - Peter Friedkin (the guy who goes cuckoo towards the end)
Ellen Wroe - Candice Hooper (the gymnast)
Jacqueline MacInnes Wood - Olivia Castle (the rocker girl with glasses)
P.J. Byrne - Isaac (a rather obnoxious IT dude)
Arlen Escarpeta - Nathan (the newly appointed plant manager)
David Koechner - Dennis (the bald sales boss) 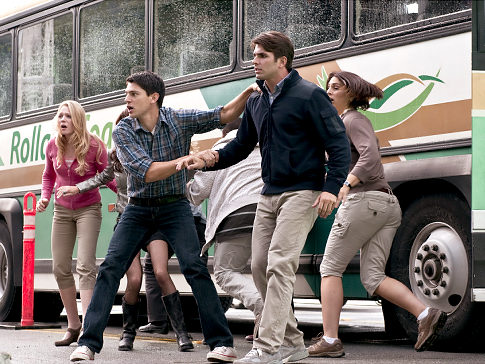 As the story goes, one by one death comes looking for them in gory ways. We get to see them die in gruesome ways which actually made up the core of this movie, as the storyline and character development is close to non-existent. What I liked about this latest installment of Final Destination was the way the deaths were played out. It wasn't as straight forward and predictable as before. For example, the wet puddle with an exposed electric cable does not kill one of the characters, instead it was a totally unexpected death far from being electrocuted. 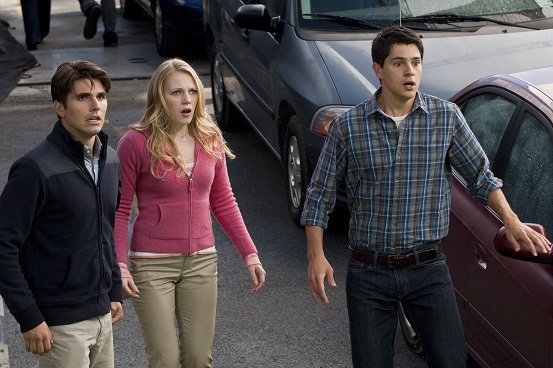 Overall, I rather liked this movie, as I did for the past four installments. The storyline is bland, and zero character development, but who cares, because we were there just for the death scenes. At least that was why I watched this movie. Beautifully played out and gruesome as ever, this movie is definately not for the weak of heart (think along the lines of Saw, and Hostel). I wouldn't rate it very high though, a 5/10 would suffice in my opinion. Now where can I get the uncut version of Final Destination 5?

I find it funny instead of excited. haha

Sherry,
Lol! Funny? you didn't cringe at some scenes? :P

seems like a lot of censorship for this one, would try to download the unclean version next time but 5/10 is not good enough for me to even put the effort to do so... haha...

lost interest on this show after part 1 and part 2

I saw 1 and 2, scary.... never saw the rest. This kind of movies, better wait for "original" DVD - very clear and not censored.

i'm not a fan of the franchise. after the first two movies, the following sequels are predictable and corny. thanks for the share tho, i didn't even know the 5th one was out.
do they censor alot of the scenes?

hahaha. lots of laughter for this wan.

its' hard to put them together with saw or hostel la, cause saw and hostel is like u suffer dam hardcore before die, FD franchise is like "us waiting for the person to die and den suddenly he dies!" most of the time not much pain.

Actually I thought it was okay. Doin' my review soon =)

definitely an interesting movie..btw, if u still hvn't received my mail, guess it must hv got lost!

oh, this movie looks interesting, but then already the 5th sequel, sure there's nothing new already.. don't think i want to watch unless it's free..

Can't wait to go watch this. I can imagine the blooood XDDD

Okok, must go catch the movie, looks kinda good. I think the best among the first 4 was the first one. After that some of the scenes become predictable.

After you found the uncut version, pass it over to me, ok? hehe

It was very cool to meet you. Imagine my surprise seeing the photo uploaded so soon =0 Hope to meet you again in any future Churp Churp screenings!

I have had enough of Final Destination! I still like the first one best! Oh, you were in the movie too? Haha!!

Would be catching this movie soon and in 3D too!