From my previous post here, I actually won myself 2 tickets to catch a special screening for the new movie by Tom Hanks, Larry Crowne. I was actually interested in this romantic comedy because it actually starred two rather famous stars Tom Hanks and Julia Roberts, and I love catching romantic comedies with my loved one.


The movie was slotted for 9.30pm, but we were already there by 8pm for ticket collections. As this screening was sponsored by Advertlets, I got to catch up with quite a number of fellow bloggers as well. There will be a post up soon on what we had for dinner that night. Do watch out for it.

Coming back to the movie, Larry Crowne is directed by Tom Hanks himself, but together with Julia Roberts, it turned out to fall way short of my expectations. Tom Hanks plays a straight-ahead nice guy who just got downsized from his job in a shopping mart. The initial scenes see him getting mocked before blatantly fired even though he bagged 8 employee of the month awards. "Nice guys finish last" indeed.

We then see Larry Crowne (Tom Hanks) take up a course in a community college where he meets up with this rather sad lecturer Mercedes Tainot (Julia Roberts), one who has lost the passion in life, had a bum of a husband and was just teaching at the college to make ends meet. Before the sparks actually flew between them, we see a side plot of Larry flirting with a rather young student Talia (Gugu Mbatha-Raw) which to me did not make sense at all, other than wanting to tell the audience that Tom Hanks still has what it takes to woo the younger ladies.


In any romantic comedy, we would have expected to see some sort of chemistry between the lead character and his love obsession, but here there were close to none. There were some moments of laughter, but it was too little to actually enjoy the movie fully. If you're a Tom Hanks fan, and would like to see a sentimental draggy movie, then do catch this film. As for me, I wouldn't say it was bad, but I went in expecting to see a feel good romantic comedy but the romantic part of it really fizzled out. Comedy wise, I really expected more from Tom Hanks. Julia Roberts still looks hot though.

Check out the stills and trailer from the Larry Crowne movie below. 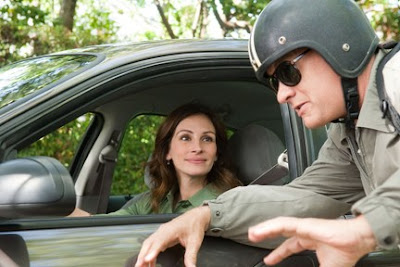 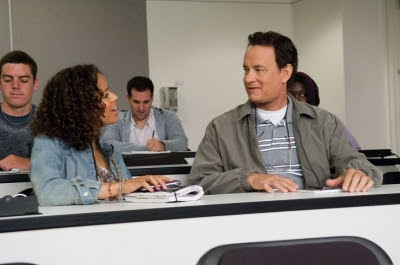