Won 2 Tickets To The Premiere Screening Of Faster

Fresh from attending the Nuffnang sponsored premiere screening of The Season Of The Witch last night, I was pleasantly surprised when I checked my email this afternoon and found out I was invited to another premiere movie screening next week. It will be held at GSC Midvalley for the movie Faster.

These tickets were courtesy of Nuffnang Malaysia's blog comment contest held during the month of December last year. 75 bloggers were promised these free tickets if their comments were chosen. What did we need to comment on? Simple, just share which side we think will come out victorious for the movie. I was one of the 75 lucky bloggers to be chosen, and for this I really appreciate Nuffnang's kind gesture. Below was the comment I shared for this contest.

I’m always inclined towards movies with a twist at the end. In this case, the twist might be a movie where our hero; the driver; Dwayne Johnson; or better known as The Rock, no matter how fast or strong he is, gets caught in the end. But everything may turn out cool even though he is caught, because the bounty hunter makes peace with The Rock!

Below was the email I received from Nuffnang. Now I'm really looking forward to attending this movie premiere as I like the main star for this show, Dwayne Johnson aka The Rock. 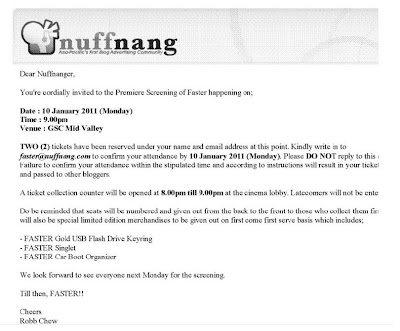