e@Curve. First off, I didn't realize Cineleisure had changed its name to e@Curve. I wasn't a frequent visitor here anyway, was here last night for a free movie at Cathay Cineplex.

Little Taiwan has multiple branches all over KL and I was not surprised to see one here as well. The timing was right as I was feeling hungry, and this food outlet suddenly popped up in front of my eyes. Well, it didn't exactly pop up, but this Little Taiwan's outlet was conspicious enough to attract my attention.

For my dinner, I chose mine off one of the promotion sets. It consisted of plain noodles in soup without any meat or veggies, and taiwanese salted chicken (looks and tastes like KFC popcorn chicken). The noodles were nice except for the soup, which was tasty but too salty. Is salt too cheap nowadays? I'm already getting bald, I think the soup just expediated the hair fall process.

My partner took the "Mee sua soup with oyster". This time, instead of being salty, it was a sweet dish. Literally in as sweet as sugar. The oyster was big enough, a bit too big for her taste though. I guess other patrons may appreciate the big oysters. 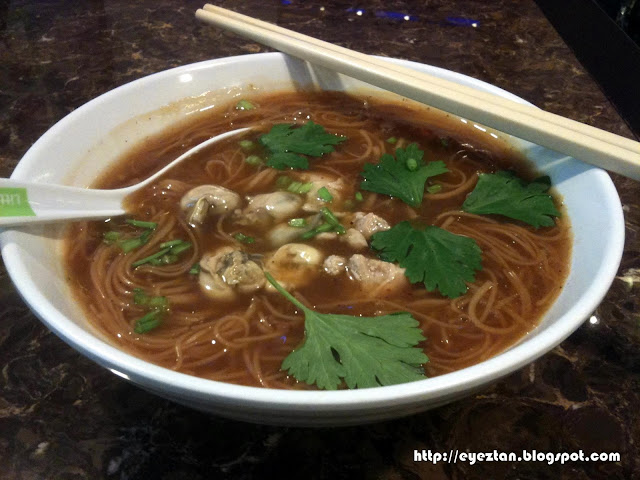 As usual, I ordered my favourite drink when I visit Little Taiwan outlets, Honey dew milk with added pearl. You can't go wrong with this drink. However the sugar level might be a bit too high. Well, an indulgence once in a while should be ok I guess.

Overall, your average Little taiwan food. They have a very big sign stating the outlet is halal, hence no pork involved even though it's Taiwan food. Good food, but the soups are a bit too salty for comfort.