If I Were The Green Hornet

Catchy title right? In a few minutes I will be elaborating on my dreams and my grand plans for fighting crimes once I metamorphosize into the Green Hornet! But first, a little background writeup, come this 24th January, Nuffnang will be hosting a preview of this supercool superhero movie entitled "The Green Hornet". Check out the movie poster below.


I already can feel myself changing already. Did I hear someone whisper, what is a green hornet? I think I did. Let me give a brief definition for what constitutes a hornet. Taken from the web, hornets can be defined as large stinging wasps of the family Vespidae, chiefly of the genera Vespa and Vespula, that characteristically build large papery nests.

But that wasn't very interesting right? Wait till you read what hornets can and will do if you were to mess around with them. Hornets pack a heavy sting! Yes we do, I'm already starting to refer myself as a hornet, a green hornet to be exact. Please bear with me. We are not your average worker bees who dies after one sting, we can sting again and again until kingdom come. Careful, as some of my fellow hornets are among the most venomous insects. After taking a sting from us, allergic reactions, fatal in severe cases can occur. Hear that? We are killers!

Being the Green Hornet, I'm going to borrow off the tagline from my fellow superhero Spiderman (We're great friends you know, beer buddies) "With great powers, comes great responsibilities". However, being a creative cool superhero, I'm going to modify that tagline to "With great stinging powers, comes great pains!" With this tagline, it'll most likely strike fear into any criminals who dares to mess with me.

But wait, with one tagline does not make a superhero. The green hornet (me!) needs some cool costumes and most importantly a superhero's logo! Have a look below at the logo I'm going to wear on my costume.

Being a tech savvy superhero, in this age of computers, blogging and the world wide web, before donning my outfit and flying from rooftop to rooftop chasing crime lords, I can actually research about them first! Seriously, no matter how evil or powerful you are, you're bound to leave some tracks in the cyberworld. Heck, I might even be able to dig out the Facebook or Twitter account of my evil nemesis who so happens to be a super evil drug lord in Columbia. It would definately make my job easier in tracking these criminals.

Coming back to the jumping from rooftop to rooftop part, I think I might skip that, as I have my super cool modified Hornetmobile (Think Batmobile, but in green) to chase down any lawbreakers. Check out my supercar below! I'm going to be the best superhero this world ever needs. 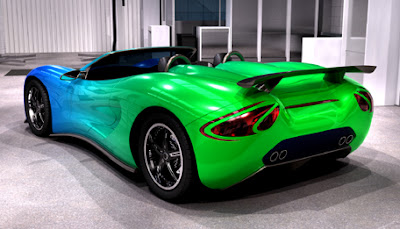 I'm going to leave you with some official photos from the upcoming Green Hornet movie starring Seth Rogen, Jay Chou, and Cameron Diaz.