I just came back from the premiere showing of The Green Hornet sponsored by Nuffnang. Nuffnang was so generous as to give out these free tickets tonight. This was the 3rd premiere screening that I have attended in a row courtesy of Nuffnang, the first was The Season Of The Witch, second Faster and tonight's offering The Green Hornet.


As usual I was there early, the ticket counter was to be opened at 8pm for the 9pm show. I reached at around 7.40pm. 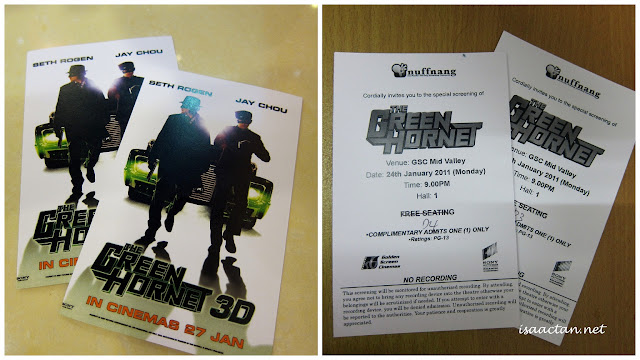 This round I was lucky to be one of the first few in line, and got myself a cute little freebie. Only the first 10 or so in line got it. Until now I'm not really sure what it is, should be a torchlight of some sort. I'll need to get some batteries in it before it'll function. Have a look below.


Back to the movie, a word of advice, don't go into the cinema expecting The Green Hornet to be a "Batman" superhero type of movie. Instead think along the lines of "Rush Hour". The Green Hornet is an action comedy, with the emphasis being on comedy. We have Seth Rogan playing Britt, the green hornet character and Jay Chou playing his sidekick, Kato.

The movie starts off showing Britt being the regular playboy millionaire's son having a fun time in life, that it until his dad gets murdered. The bumbling goof then meets up with Kato who together with him starts off their alter egos as the green hornet and his sidekick. The sidekick does not have a name by the way, but Kato was the one who had to save Britt's behind all the time. Three quarters of the show had me feeling quite irritated with the way Britt playing the green hornet.

Anyway, moving along, the green hornet poses as the bad guys at first, in order to stop an even badder dude. There are lots of laughter throughout the movie as we see Britt goofing up all the way until the end where he suddenly shows his heroic side. I prefer Kato as the brilliant sidekick who invents the green hornet's cars, guns, gadgets and can fight his way against all the baddies.

Overall a rather fun movie to watch, but not very memorable. Jay Chou did a good job here portraying the cool sidekick, while Seth Rogan just comes off as being the funnyman. Somehow, I don't really fancy my green hornet superhero being played by a funny guy.